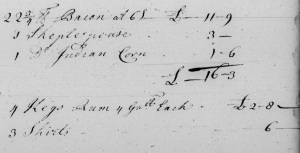 In Library and Archives Canada digital copy of the original minutes, May 1723 starts here

In May, the Albany Indian Commissioners were busy on several different fronts simultaneously. They entertained and traded with two groups of people from “far Nations,” a general term for the peoples to the west and north of Iroquoia. The second group of Far Indians came not only to trade, but to meet with the Mohawks and to tell the commissioners that they were joining the Five Nations. The proceedings held with them are printed in Volume 5 of O’Callaghan’s Documents Relative to the Colonial History of the State of New York, beginning on page 693. Simultaneously, Albany hosted a major treaty conference with representatives from the Five Nations and Massachusetts Bay to discuss the ongoing war between New England and the Abenaki. They also met with an Abenaki delegate who appeared unexpectedly (at least to the reader.) The initial proceedings between the Five Nations and Massachusetts can be found in the Livingston Indian Records beginning on page 236, but the Livingston records do not include a gruesome Massachusetts proposal to pay for Abenaki scalps.

The May minutes also include related entries not printed in these sources, including a report by Laurence Claessen Van der Volgen about his recent trip to invite the Five Nations to the meeting with Massachusetts, during which which he learned that they had officially accepted the Tuscaroras as a sixth nation. He also encountered problems with the Senecas and Onondagas, who initially did not want to come to the meeting because the French had advised them to stay away.  Representatives of all of the Six Nations came to Albany in the end.

The first group of twenty “far Indians” arrived on May 8th, followed by a larger group on May 29th that included 80 men in addition to women and children whose number is not given. Simultaneously, the Five Nations sent a delegation of 80 people and Massachusetts sent at least three representatives, William Tailer, Spencer Phips, and John Stoddard. The first group of twenty “far Indians” was housed in the Indian houses that Albany maintained in order to provide a place where people who came to trade could stay without being pressured to sell their goods to a particular trader.  If all the other native visitors stayed there as well, the Indian houses must have been filled to capacity.

Cadwallader Colden described one of these houses as it looked when he visited it two years earlier in early September 1721:

Wee diverted ourselves one day before the Indians were all meet in a Large boarded house without the towne which stands their alway for Lodging the Indians Their wee saw a great many animals tollerably well delineated with coal by the Indians on the boards of the house The most remarkable was a Crocodile very well designed which shows that they travell very far to the southward’s perhaps near to the mouth of the river Misasipi The Indians pointed towards the southwest as the place where these animals are found The Interpeter told us they have the dried skin of one of them att one of their Castles They had beefs likewise drawn in sevaral postures which show’d that the persone who did them was not without a genius for Painting these the Indians pointed to us were found to the Westward We saw fowls exactly resembling Harpies butt perhaps they were design’d for owls. [Collections of the New-York Historical Society for the Year 1917, NY, 1918, p. 128]

The nation of the first group of 20 Far Indians is never identified. Possibly they were an advance party from the second group. They began by smoking the calumet (peace pipe) and singing, after which they said they had come to Albany to trade. They explained that they came from several castles (communities) which had sent them to see whether they could get good prices at Albany. The commissioners welcomed them, accepted their calumet to show to others of their nations who might come to trade, warned them against listening to the French, gave them a present of blankets, shirts, food, and liquor, and assured them that they would find cheap goods and pure rum at Albany.

Expanding the Six Nations to Seven?

The second group, led by Awistoenis, or Owiestoenis, and a Seneca translator, Sakema,   described themselves as the true members of the “Denighcariages Nation.” They told the commissioners that others who had visited Albany claiming to be from that nation were not telling the truth. The commissioners asked what the French called their settlements, to which they responded “Monsiemakerac.” They came from six communities, one of which, Neghkareage (probably the same word as “Denighcariages”) had two castles (towns). The other four are written as Ronawadainie, Onnighsiesannairoene, Kajenatroene, and Tienonoatdeaga. In a note on p. 693 of DRCHNY 5, O’Callaghan identifies them as Hurons from “Mtellimakenack,” based on a French map. The name of their fourth town suggests that they were from the Tobacco Nation. also known as the Petun or Tionondati. The French built Fort Michilimackinac on the Straits of Mackinac between Lake Michigan and Lake Huron around 1715. In describing the Denighcariages visit to Albany, Governor Burnet said in a letter to Lords of Trade that they came from “Misilimakenak, which lyes between Lac superieur & Lac Huron” (DRCHNY 5:684). Clearly they were from somewhere in the area where the three great lakes meet. Like the first group, they brought a calumet and left it with the commissioners to use when others from their nation came to Albany.

The Denighcariages, the Mohawks, and the commissioners began by smoking the calumet together, then proceeded to discuss trade, as well as a proposal that the Denighcariages join the Five Nations as the Tuscarora were in the process of doing. The commissioners promised them cheap goods and encouraged the idea that they should join the Five Nations, becoming the Seventh Nation, since the Tuscaroras were now the Sixth. The commissioners worded this in terms of joining “this Government,” seeming to imply that New York and the Five Nations were one. The commissioners promised to address Awistoenis’s complaint that local waggoners had overcharged them for transporting their goods, assuring them that it would not happen again and sending them on their way with blankets, shirts, food, and 26 gallons of rum.

The map at the front of Volume 2 of Cadwallader Colden’s History of the Five Indian Nations, shows the Necariages of Misilimacinac. The legend explains that they were “received to be the seventh Nation at Albany, May 30th 1723: at their own desire, 80 Men of that Nation being present beside Women and children.”

Massachusetts Offers to Pay for Scalps

In the conference between the Five Nations and the three commissioners sent from Massachusetts, the parties began with an initial meeting on May 28th in which they followed the usual protocols to renew the covenant chain of friendship. The Five Nations reminded Massachusetts that it was customary for the English to mend their guns, kettles, and hatchets on such occasions.

On May 30th the Massachusetts commissioners proceeded to business, laying out a proposal from Governor Dummer that spelled out the the terms on which Massachusetts wanted the Five Nations to join it in fighting the Abenaki Confederacy. After rehearsing the ways in which Massachusetts considered the Abenaki to have wronged the English, the proposal, worded like a legal contract, says that “for the further Encouragement of your Warlike peopl[e]” Massachusetts will pay 100 pounds for the scalp of every male enemy Indian of twelve years or older, and 50 pounds for the scalps of all others killed “in fight.” Massachusetts will pay 50 pounds for each male prisoner. The Five Nations may keep female prisoners and children under twelve, as well as any plunder taken. The Massachusetts government will supply the Five Nations with any needed provisions or ammunition, but the value will be deducted from the money paid for scalps.

For each ten members of the Five Nations, Massachusetts planned to assign two Englishmen to accompany them in order to protect them from “any mischief that may happen to them from our Souldiers by mistake” and to avoid disputes about scalps. The Englishmen would confirm under oath that the scalp was that of an enemy Indian killed in battle as well as the age and sex of the person scalped. For testifying, the Englishman would receive an amount equal to what was payed to the warrior who took the scalp or prisoner.

Guns, kettles, and hatchets would be mended only if the Five Nations accepted the offer, and Massachusetts would also give them a large present if and when they did so.

At Least Some of the Abenaki Want Peace

As was customary, the Five Nations did not respond right away to Massachusetts’ proposal. And on the following day the minutes record a new development with the arrival of Achjamawat, a delegate sent to the Six Nations by three Eastern Indian castles, “Owanagonga, Kwepowanne, and Onjanawarea.” Although they were still in Albany, the Massachusetts commissioners are not listed as being present when Achjamawat met with the Albany commissioners.  The Five Nations are not listed either, but his words are addressed to them (as the Six Nations) and the interpreter for the meeting was the Mohawk leader Hendrick, who translated from Abenaki to Mohawk, after which Laurence Claessen translated from Mohawk to Dutch and Philip Livingston translated from Dutch to English for the written record.

Achjamawat began with an extended condolence ritual in which he reiterated several times that Albany was the place to treat about peace and to condole any blood shed “through Rashness or misunderstanding.” He went on to say that the Eastern Indians regret that they could not meet with the Six Nations when they came to Boston the previous fall to meditate between them and Massachusetts. They received the message sent by the Six Nations asking them to stop fighting. His people have now sent him to lay down the hatchet against New England and bury it forever.